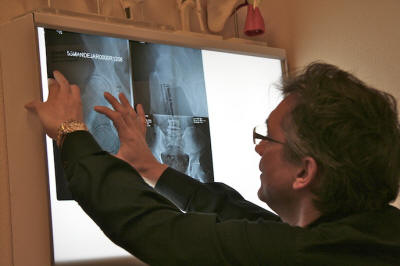 Dr. De Smet in Belgium shows me the night before my surgery how he does the procedure 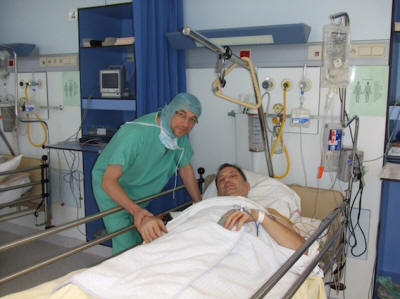 Doc checking up on me right after surgery 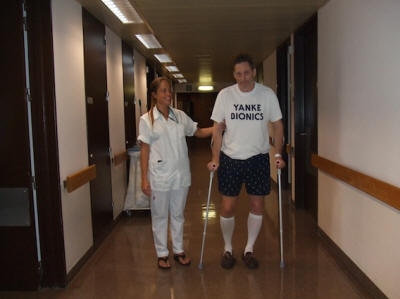 Day After surgery, My first walk 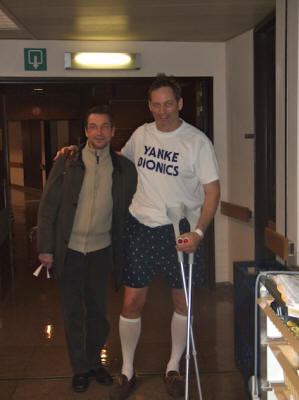 Day after surgery, with Doc who brought me the full video version of my operation GO ahead and say ithttp://www.surfacehippy.info .nice shorts Manders

Today after my transfer out of the hospital and into the water at the Villa. Wow does it feel a lot better in water! My swim buddy on my right  is from Iceland. People come from around the world to this doc and rehab 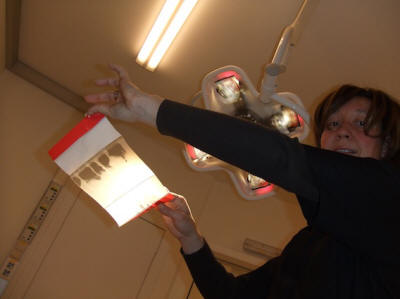 Carine my wound specialist applies Suprasorb to my incision  allowing water activities.  This thin film made in Germany is usually changed every 2 to 3 days 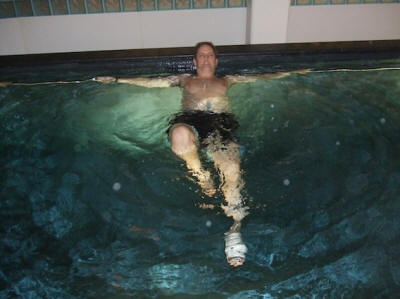 This is Carine my wound nurse that looks at my butt everyday. 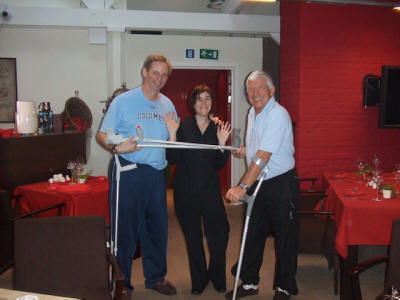 Another hip buddy who is a grand master karate instructor and owns his own Athletic complex in Holland. Sarah works the restaurant at the Villa and would make anything happen. 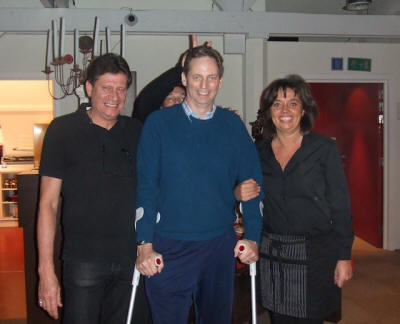 After a day with 8 surgeries under his belt, Dr De Smet sneaks up behind me to give me rabbit ears while I pose for a picture with the chef and his wife 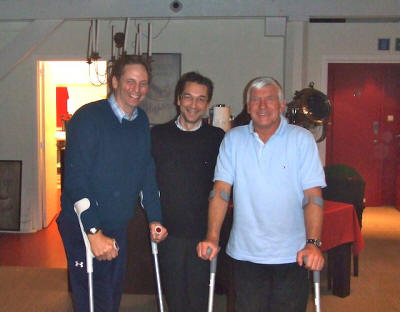 Today is my 3 week anniversary post op. Been on mucho trains, busses, Metro’s during my travels here in Europe. Today I arrived in Barcelona, Spain and finally had Paella for lunch after eating Churro’s for breakfast.

I’m still forcing myself to at least carry the crutches so I can ward off the crazy travelers. Lately I have been forgetting them at restaurants & hotel rooms too many times so I think I may finally make the transition and not carry them around anymore. I am fully 100% weight bearing and and feel like I’m ready to jog.

I still perform my usual self rehab routine each day including ( when I can) using the exercise bicycle and swimming, not to mention of course the miles and miles of walking during my travels. I will head back Stateside on Jan 11th after a stint in Italy. 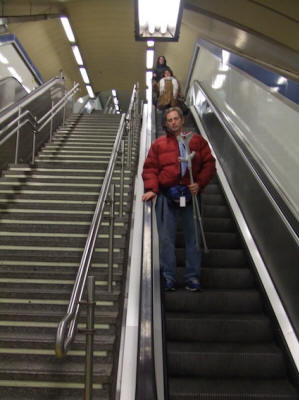 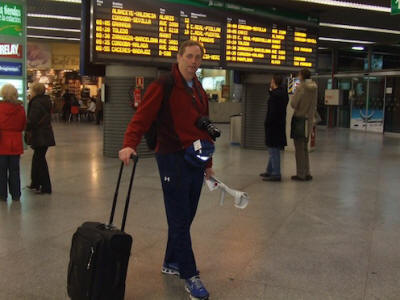 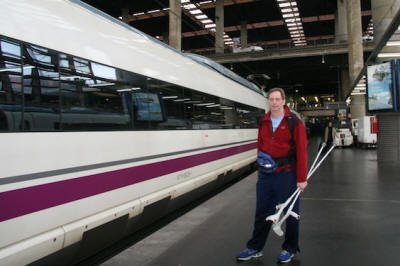 Catching the fast train to Barcelona which travels 186 MPH.

Eating Churro’s outside the train station this morning 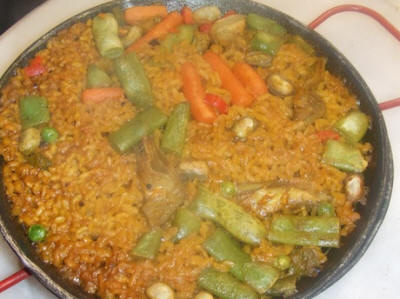 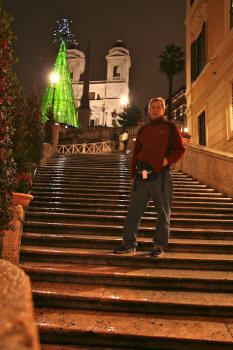 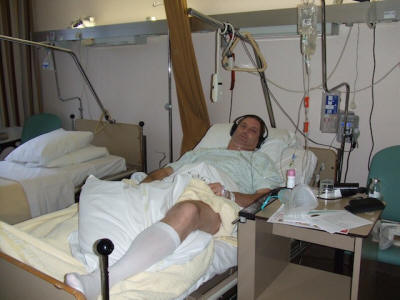 4 short weeks ago after surgery at the A.Z Jan Palfijn hospital in Gent Belgium with my new hip and old headphones

Hello hipsters,
4 Weeks post op and still traveling around Europe. I will return to the States Sunday after a long and amazing journey. Medical tourism at its best.

I won’t pretend not to have some pain day to day. However, the fact that I was able to Climb down into the Catacombs and up the Spanish steps- the longest and widest in Europe (138 of them) without crutches, made me tear up just a little inside. At one point I even got down on my knees at St Perer’s Basilica… to take pictures (-:
Less money and one of the worlds top doctors to boot. I would have never thought this was all possible.

Yes I said no crutches, which is where I am at now, but I want to make a case in favor of these handy little things for travelers. Since rehab I have been experimenting with and without them. I left the Villa in Belgium after my stay and traveled on Planes, trains, busses, Ships, Metro’s, taxi’s and trams, throughout Paris, Madrid, Barcelona across the Mediterranean and now in Rome. I have seen it all and I’m a pretty good judge of people.

I can emphasize to you that if you are using at least one crutch, in every culture, people will get up and offer their seat to you while riding on one of those jerky Metro’s. I’ve had Kids run full speed at me while playing soccer, only to be grabbed by their parents at the last moment so they don’t cause a collision. I was put at the head of the line at the Louvre, given extra space while admiring Gaudi’s work and had a protective barrier around me while walking on the insane La Rambla during New Years eve. It’s sort of like a Badge or a license, it is a protective circle that lets other people know to stay clear. Without it, you are a bowling pin! I am quite capable of functioning without crutches now but when the crowds get crazy it might be wise to advertise.

Now the hole in the floor the Italians call a toilet….
that’s another story. 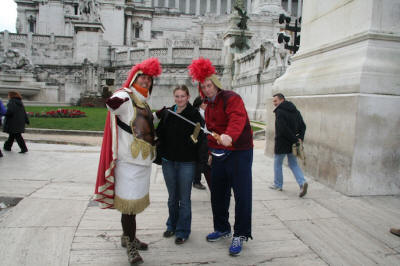 These armored people claimed they were real soldiers from the day. We believed them. 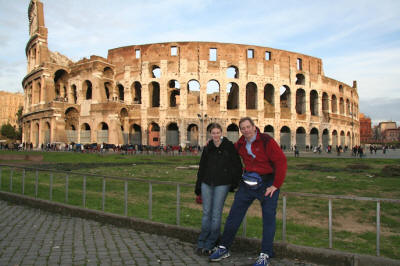 The Colisseum which was originally called the Flavian amphitheater was Built in only 10 years time and finished in 80 AD. Counting standing room it housed 70,000 spectators. Many don’t know that a huge awning made from wood and mesh protected the spectators from the sun and was constantly adjusted (for the suns movement) during the day by sailors.  The wooden floor was covered by sand and swept away between each show replaced with new sand. This would clear the blood and guts out before the next showing which went on all day. About 30 days of use were common each year. No admission was charged, seating was assigned based on classes. Royalty sat ring side, schmucks sat up high. Prostitute huts were busy all around the colisseum as spectators emptied out after the days events and needed something to do 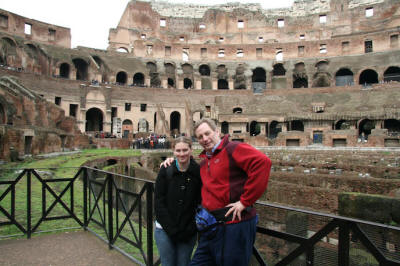 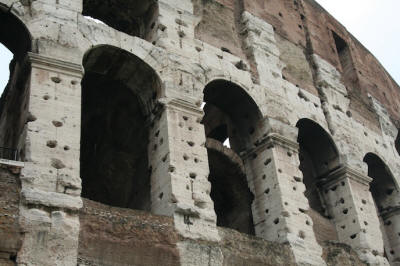 BENITO MUSSOLINI’S (National Fascist Party) home on Palatino hill. The house now is a museum. Over the years the villa became a symbol of the Mussolini regime. After the dictator’s death in 1945 his body was hung upside down for public viewing in Milan as confirmation of his demise. 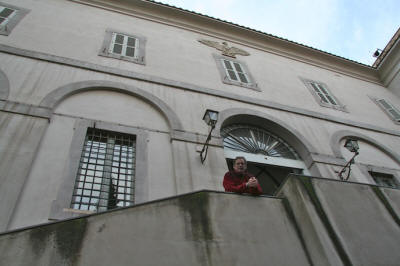 As a tradition, I looked for a hidden place to pee on the property. I couldn’t find one without being arrested this time.

To read and see more about Jared’s Belgium Adventure, visit his website