↓
Home→Athletes HR Stories→Iron Mike gets BHR with Mr. McMinn of the UK

More information at
the McMinn Center

He has twice been Mr Universe and has played the tough guy in a variety of
action movies, but when Mike Mitchell was floored by a hip injury it was
Birmingham surgeon Derek McMinn who came to the rescue.

Fitness icon "Iron Mike", who appeared as a stuntman and action fighter in smash
hit films Braveheart and Gladiator, had been suffering from severe
osteoarthritis in his left hip but, true to his tough-guy image, had carried on
regardless.

However, when the 56-year-old took a nasty fall while out on his yacht he found
himself almost unable to walk and in danger of missing out on a new film he had
just agreed to appear in. 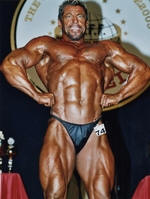 As Mike contemplated surgery and a one year lay-off, he heard about Derek McMinn
the inventor of the world-famous Birmingham Hip Resurfacing (BHR) treatment.
From then on Mike’s story was heading towards a very happy ending.

"I was told a hip replacement would lay me up for at least a year so when I
heard about the work done by Mr McMinn I just had to get in touch with him. The
result of the operation was unbelievable – I was active and exercising within a
month and back sailing a month after that," he explained.

Mike, who has also held the World Fitness Champion title five times, had his
operation at BMI Edgbaston Hospital where he met up with Mr McMinn, the inventor
of BHR.

He explained: "My whole life has been about finding the best. When I trained for
Mr Universe I found the best trainer and the best nutritionist. When I knew I
needed an operation I only wanted to deal with the best and in Mr McMinn I found
a real world leader in the field."

Now back in the film studio, as well as taking part in sailing adventures such
as sailing a yacht the 1,900 miles from Gibraltar to Turkey in storm force 10
conditions, Mike says he is "as good as new" and looking forward to his latest
movie "Rose" being shown at the Cannes Film Festival next year.

Mr McMinn, affectionately known in the medical world as the "Father of Modern
Hip Resurfacing" – that even he was amazed at the speed of Mike’s recovery.

"Even though Mike is a very strong man there wasn’t much he could do once the
arthritis in his hip reached such a stage. It didn’t take me long to decide that
the BHR was the perfect treatment for him and, judging by his impressive return
to fitness, it would seem to have been the correct decision."

"One of my patient studies shows that 92% of male patients with one BHR return
to playing sports after previously being sidelined by the injury while 62%
return to playing impact sports like squash, judo and football."