Femoro-acetabular impingement or FAI occurs when the ball of the head of the femur does not have its full range of motion within the socket of the acetabulum of the pelvis.

Impingement itself is the premature and improper collision or impact between the head and/or neck of the femur and the acetabulum. This causes a decreased range of hip joint motion, in addition to pain. Most commonly, FAI is a result of excess bone that has formed around the head and/or neck of the femur, otherwise known as “cam”-type impingement. FAI also commonly occurs due to overgrowth of the acetabular (socket) rim, otherwise known as “pincer”-type impingement, or when the socket is angled in such a way that abnormal impact occurs between the femur and the rim of the acetabulum. 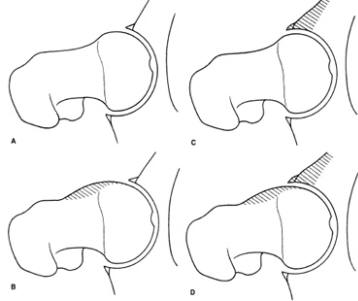 Young women who desire a more functional hip replacement were recently dealt a large blow  when the smaller sizes of the Birmingham Hip Resurfacing  (BHR) device were withdrawn from the market by Smith Nephew Richards because the 10-year revision rate for women was higher than for men in most large registry analyses. (The major national registries are Australia, Combined Scandinavia, and Great Britain).

Joint implant registries estimate an overall failure rate for different implants when used by the average surgeon in a country. Specialist surgeons can typically perform better than these data suggest.

Hip resurfacing is a treatment for severe hip arthritis that results in a nearly normally functioning hip. Scientific studies  demonstrate that patients walk more normally in gait studies, and are more likely to be able to resume full impact sports if they have a hip resurfacing rather than …

I would like to comment on Smith&Nephew’s BHR decision to exclude females and smaller sizes than 48 mm.

The decision has been based on the renewed NICE criteria. I wouldn’t say that I don’t want best outcomes for all of my patients. But if you compare those criteria to other surgical outcomes it looks extremely strict. I think it would be just consequent if the collected data would have been collected the same way. The data results could never be lets call it clean like they have been collected. They are naturally influenced by so many things. For example: Revision of resurfacing is so much easier (also the decision is easier) than revision of THRs especially of cemented stems, or let’s face the understandable poor results by some surgeons especially in the past because of only few numbers of performed resurfacings. That’s all in the statistics!

Pat: Thanks for asking. In my view Smith & Nephew has acted responsibly. I have not been offering metal on metal resurfacing in the withdrawn smaller sizes. We have been offering just polyethylene in these sizes. I am attaching my abstract for an upcoming meeting.

Yes, we use the implants shown on the Synovo Preserve site.

Let me know the best way to reach patients. We are happy to talk with patients.

I am concerned that patients might misinterpret the recent decision by Smith & Nephew as not supportive of resurfacing. As you know resurfacing is alive and well and works better than ever.

We actually have more rather than less to offer patient.

FOR WOMEN THIS IS NOT AN ISSUE, BECAUSE THEY CAN GET CONSERVE PLUS WHICH HAS NOT THESE RESTRICTIONS, BECAUSE THERE IS A LARGER MARGIN AND COVERAGE!!!!

SO YOU CAN PUBLISH THIS ON YOUR WEBSITE ALSO WITH MY REMARKS!!!

THAT IS WHAT I WROTE IN MY BOOKLET ALREADY 6 YEARS AGO (you can find on my website) WITH THE DIFFERENCES BETWEEN BHR AND CONSERVE.  Also  Correlation between inclination of the acetabular component and metal ion levels in metal-on-metal hip resurfacing replacement

Currently revising only the acetabular component with a metal/metal (M/M) articulation is only possible with the Biomet Magnum and SNR Birmingham implants. All others have been withdrawn from the market. Wright Conserve can still be revised in this way outside the US, because these perfectly good implants were only withdrawn from the hyper-litigious US market. The failed Depuy ASR and Zimmer Durom can be revised with a custom polyethylene (PE) bearing acetabular component. The only surgeon I know of who has …

Was standing on my good leg, operated leg was at about a 90 degree angle while I put some cream on my knee. Probably bent forward and flexed my hip a bit, the operated side knee rotated in and I started to fall. Tried to push with the operated leg to right myself, NO STRENGTH. I collapsed and fell back, noticing a strange friction in the hip joint after landing on my butt.

Called my surgeon’s office and they got me in right away. They took x-rays. Dr. Rogerson said I apparently partially dislocated the hip and it re-located when I fell. Said he had seen this once before. Another tall woman who can hyperextend her elbows like me (flexible joints) dislocated while squatting. He told me to go back to post surgery safeguards (no crossing midline of body, sleeping with pillowbetween legs, etc) and to follow up with him …

Health care giant Johnson & Johnson Co.’s ( JNJ ) medical-device unit DePuy
Orthopaedics, Inc., announced Tuesday that it has reached a $2.5 billion
settlement to compensate patients in the U.S. who were subject to a second
surgery, known as revision surgery, to replace their recalled DePuy ASR Hip
system.

More than 12,000 thousand lawsuits were filed by patients against DePuy in
federal and state courts related to the recall of its hip-implant products. The
lawsuits were filed by implantees who have suffered metallosis, premature device
failure, and other serious complications allegedly caused by the metal-on-metal
hip devices recalled in 2010.

Dr. Daniel Snyder seemed genuinely sorry
for what happened in the course of my hip resurfacing
surgery May 5, 2010, at Newton-Wellesley Hospital, Newton,
Mass.

That makes two of us.

I sought surgery to fix an arthritic right hip which made me
limp and seemed to aggravate an otherwise unrelated back
problem. I had been an avid long-distance runner before all
that, and I remained in athletic shape (and 45 years old) at
the time of my surgery. I had hoped someday to return to
cycling, hiking and cross-country skiing.

I awoke from surgery unable to feel or move my lower right
leg. My leg was swollen and bruised, and an MRI was ordered
up within hours.

Ultimately, Dr. Snyder and various neurologists and
neurosurgeons concluded that Snyder must have injured my
sciatic nerve near the site of the operation, most likely
while retracting the flesh to get at the …

SAN FRANCISCO – In hip resurfacing the femoral ball in the
hip joint is not removed, but instead is trimmed and capped
with a smooth metal covering. Young and active patients with
arthritis often choose hip resurfacing over total hip
replacement to minimize the risk of hip dislocation, and to
preserve the bone for a revision surgery should the primary
resurfacing fail. However, the long-term effects of sports
on a resurfaced hip were unknown.