I have had the Birmingham Hip for over three years in my left hip and it is doing great. I have degenerative arthritis, similar to my mother who had to have her hips replaced when she was about my age; I am 55 years old. Arthritis started in my hip when overtraining for a marathon in 1997 and progressed until needing a hip replacement in 2009. My aunt had had a Birmingham Hip done by a doctor in Minnesota who I saw; but when I told him I liked to run and play squash, he told me that, “your pivoting days are over”. I researched other hip resurfacing doctors and decided to have Dr. Rogerson do the procedure after looking at the Surfacehippy website. Dr. Rogerson seemed to expect people to go out and live a normal life after hip resurfacing; which sounded a lot better to me that just being able to walk out to get my mail.

Hip Hab was especially helpful in getting me to feel comfortable with my new hip before going home. I had been quite nervous that I might do something stupid to mess up the hip once I got home and HipHab gave me the assurance I needed so that I felt comfortable with dealing with my new hip. Walking around in the therapy pool felt like walking normally. By the time I left Hip Hab I could walk up to and around the Madison Capital circle, about a mile, and back just holding my crutches for insurance; not using them at all. My recovery was in line with the fastest recoveries that I have read about. I would guess that Hip Hab sped up my recovery by several weeks and gave me a lot of confidence that I would be OK on my own.

My other hip is well on its way out, so I haven’t been able to run or play squash yet, but I ride my bike regularly on a ten mile commute each way to work and have been swimming for one mile several times per week. There is no pain whatsoever in the left hip.

You, Renee and the rest of the staff were great to work with. 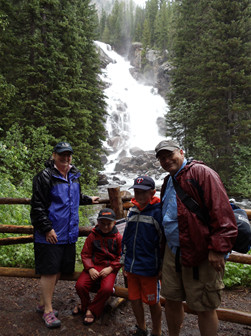